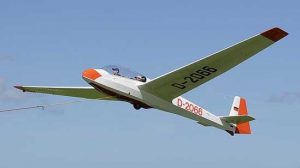 The ASK 13 is a Biplace glider designed by Rudolf Kaiser and built by Alexander Schleicher. It is mainly used for initial training of glider pilots in 1965 Rudolf Kaiser (en) continues his development of the two-seater Ka 2 and ka 7 by the ASK 13, made of wood, metal and fiberglass. Its wide canopy provides good visibility to both pilots. The 6-degree reverse-arrow wings allow the rear-seat pilot to be seated near the centres of gravity and lift. The glider is thus properly centered with one or two drivers. The wings are interlining, with metal airbrakes Schempp-Hirth, under and above. The fuselage is made of welded and interlining steel tubes, except the fiberglass nose. The tail is wood-plated, except the rear of the rudders and elevators that are canvassed. The starboard elevator is equipped with a Flettner depth compensator. The fixed landing gear is a suspension wheel installed at the rear of the centre of gravity. A skate was originally installed under the nose, but many K13 now have a nose wheel. The first flight took place in July 1966. In January 1978 more than 700 ASK 13 had already been manufactured. They are excellent school gliders as they easily slip in and out of a spin and come out easily. They are solid construction and easy to repair. The penetration of the French market was greatly facilitated by the Wassmer WA-30 Bijave, whose flight bans forced the authorities to soften their protectionist positions since there was no longer a reliable French glider To oppose the ASK131 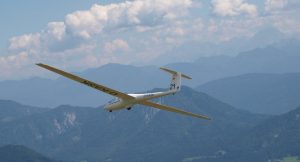 The Ask-21 was created by Rudolf Kaiser as the modern version of the popular ask 13, in order to meet the demand of modern biplaces for the training of the pilots. The ASK-21 is the first biplace built entirely of composite material produced by Alexander Schleicher. The prototype made its first flight in December 1978 and production began in 1979. Today, continuous production and more than 750 units have already been built. In December 2004 the ASK-21 Mi, a standalone version for takeoff, flew for the first time. The thick profile of the wing gives good behavior at reduced speeds (stall speed is approximately 65 km/h). The ASK-21 picks up in the least dangerous way: if the speed is gradually reduced in horizontal flight, the glider starts to vibrate, warning the pilot of the proximity of the stall. But the nose of the glider still does not collapse, only the Vario indicates a significant fall rate. Simply bring the handle back to the neutral to resume a normal flight pace. A 10-to 20-degree nose-up should be maintained to obtain a stall. This is a perfect example of mechanical stability, where the aircraft picks up a normal plate by itself. During stalls, the kite remains perfectly controllable in roll. It is very difficult, or almost impossible, to bring the glider into a spiral under normal conditions (all aircraft can spin). In order to make the spin possible, for training or demonstrations, a “spin kit” is sold by the manufacturer. It consists of ballasts placed near the tail that move the center of gravity. Used as a one-seater, the ASK-21 rises as well in the ancestry as the K 8.