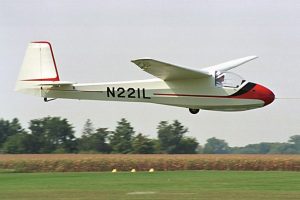 The Alexander SchleicherK8 is a one-seater development glider developed to occupy a missing place between the K 7, 2-seater school, and the Ka 6, competition monoplace. Designed to be built as a kit by the clubs, it was a cantilevered high-wing monoplane had welded steel tubes with fiber-coated front, interlining on fuselage wood frames. The sail was 1.75 m2 compared to the Ka 6 without changing its size, but with a new profile. 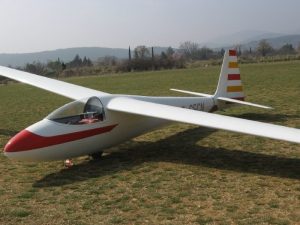 Alexander Schleicher Ka 6 Rhönsegler is a German Standard-class competition glider who dominated the competition in the early 1960 years. 1400 copies were constructed.
On October 29, 1955 began the flight tests of a new, 14-M large cantilever-wing competition glider and laminar profile designed by Rudolf Kaiser. The tests revealed excellent qualities but it was decided to extend the 40 cm sail on the series model. In 1956 the Standard class was created and Kaiser only had to lengthen the sail by 60 cm to produce a large competition glider. 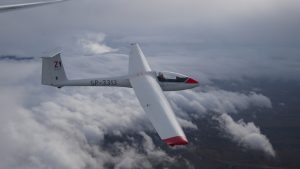 Glider drawn at the beginning for the club class, as originally defined, the SZD-51-1 "Junior" is distinguished by its qualities of handling, safety and softness of steering. The Junior was designed to meet the demands of the clubs, in terms of safety, ease of handling, simplicity and robustness, not forgetting the comfort. Its wide cabin, its oversized fixed train, and its particularly sturdy structure – intended to endure at least 10 000 hours of flight in school and associative conditions – are the answer to this request. Easy to assemble (single axis for wings and automatic steering), easy control of vital elements, ease of maintenance, external visibility, adjustable rudder in flight, and fully adjusted backrest: the list of Qualities is long. But the main attraction of this glider (whose current model has already been manufactured in 250 copies) lies in its wing, of large surface, with the profile optimized to offer maximum safety, homogeneity of controls and especially a smooth stall ( Without a twist). For all these reasons the SZD-51-1 "Junior" is certainly the logical choice in the period, oh how critical, of the first solo flights and the first circuits. It is for its qualities of easy steering, comfort and robustness, that many pilots (even after learning their flight bases) continue to prefer this machine, for country flights, wave flights and even for certain competitions.