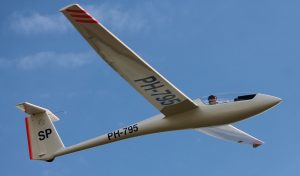 The Centrair C101 Pegasus is a standard class glider, widely used in French clubs, due to its French origin and versatility (simplicity of flight, performance, safety). It is also used to train the pilot officers of the Air1 Army, 2. The Centrair C101 Pegasus was designed by Marc Ranjon3 and manufactured by the company Centrair (EN) 4 from 1981. It includes in its design the fuselage of the ASW 203. The wings were designed by the ONERA, which determined the best profiles by computer calculus from the root to the saumon5, and also studied optional pennies. From 1990, the Pegasuss (called “90 models”) are equipped with a different interior (shorter handle, less voluminous dashboard) and some minor structural changes that have also caused an increase in the empty mass of the Glider (approx. 20 kg). The major difference, however, is the adoption of an automatic connection of the flight controls during the installation of the glider. The Pegasus benefited from a policy of the French Sailing Federation (FFVV) favouring its purchase by the French clubs. Therefore, many copies fly in France, and a copy exceeds even the 9000 hours (F-CEXV based on the aerodrome of Challes the waters) 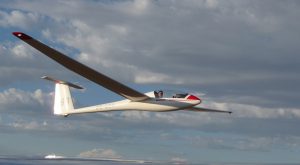 The LS4 was the successor of the LS1 in the Standard FAI class, making its first flight in 1980. It is the third most produced non-military glider (after the Schneider Grunau Baby and the Blaník): A total of 1048 copies was built by Rolladen-Schneider until the bankruptcy in 2003. It is a long production, only comparable to that of the Schempp-Hirth discus. The LS4 won the first two places of the 1981 World Championship in Paderborn in West Germany and the first six places in the 1983 World Championship in Hobbs, New Mexico. This glider remains one of the favorites in the Club class competitions and in the leisure sailing flight. He confirmed Rolladen-Schneider’s reputation for designing well-finished gliders, both easy to fly and competitive. It is sufficiently docile for beginners and hardly less efficient than the gliders of the current Standard class. Given the continued interest in this model, the LS4 can be reproduced by the Slovenian manufacturer AMS-Flight [archive]. The LS4 has been replaced by the LS7.

The design of the LS4 was influenced by the experience gained with LS2 and LS3 gliders with curvature flaps. Wolf Lemke resumed the shape of the double-trapezoidal wing, which increased the surface area in relation to the LS1 and LS2, and enlarged the control surfaces: the fins were stretched along the wing and the tail was increased. The drift and depth were a resumption of the LS3. Notable features:

The structure consists entirely of synthetic foam surrounded by composite materials. The outer coating, like most composite gliders, is made of Gelcoat that protects the composite from moisture and UV and is thick enough to allow the aerodynamic profile to be respected. 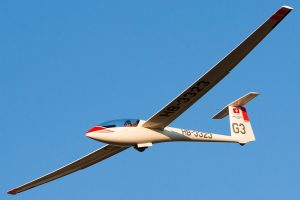 The 304 was the second and last glider developed by Glasflügel in cooperation with SCHEMPP-Hirth. It was the Glasflügel Mosquito. The principal designer of the 304 was Martin Hansen, known for his role in the design of the Akaflieg Braunschweig SB-11. The glider continued the Glasflügel tradition of innovation: the parallelogram control stick, combined trailing edge flaps and airbrakes, automatic trimming, heel-operated brakes, automatic control connections, the extremely easy assembly of the wings and Tailplane, the parallelogram forward-opening canopy and lifting instrument panel are Glasflügel innovations largely copied by other manufacturers. The prototype flew for the first time in May 1980 and entered production shortly after. Glasflügel was financially struggling at that time, following the untimely death of Eugen Hänle, the founder of the company, in 1975. A partnership with SCHEMPP-Hirth led to a surrender of technology. Lacking investment and an energetic leadership, the company folded in 1982. A small batch was later built by the Jastreb company in Yugoslavia as the 304B. The 304 is sometimes referred to as the H-304, which is not correct, as the H applies only to the Glasflügel sailplanes designed primarily by Wolfgang Hütter. 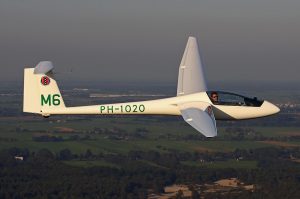 The Rolladen-Schneider LS6 is a 1-seater, 18-metre FAI class glider equipped with a bend flap. It was manufactured between 1984 and 2003 the prototype of the LS6, which was the replacement of the LS3 in the class FAI 15 meters, made its first flight in 1983. It began to be manufactured the following year and was the glider that remained in production for the longest time at Rolladen-Schneider. A total of 375 copies of all versions were constructed. From a trenched design to the past, LS6 has introduced composite materials for the fabrication of the structure, thin profiles for wings and tail, wing extensions and other devices that have been maintained on all LS gliders. Following. The design strategy is well illustrated by the fact that LS8, one of the best gliders in the standard class, is actually a “standardized” LS6. Gliders Akaflieg Darmstadt D41 (biplace side by side), LS9 and LS11 all have wings built in the mussels of the LS6. The LS6 has been replaced by the LS10, which is now produced by DG Flugzeugbau. 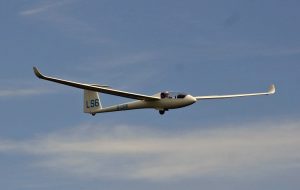 The LS6-C18 underwent a reduction of ballasts at 100 litres to adapt the wing extensions to a wingspan of 18 meters and an increase of the maximum speed to 280 km/h. 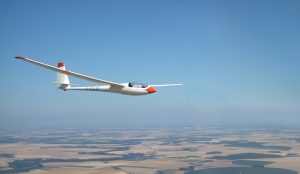