The ASH 25 is a high performance, Open competition class glider, built by Alexander Schleicher, originally with a wingspan of 25 meters. The designer Martin Heide (the "H" in the designation) combined the wing of the world champion, the ASW 22, with a fuselage derived from the FS-31 the glider of the Akaflieg Stuttgart, which was designed with a fuselage generating little drag. The prototype was named AS 22-2. Over time, the span was increased in the latest versions at 25.6 and then 26 meters with winglets. The ASH 25 is given for a finesse of 60.

The Schempp-Hirth Duo discus is a high performance glider, primarily designed to fly the countryside. It is often used for advanced training and for the pleasure flights of experienced pilots. In the last few years, with the creation of the Biplace category 20m in official competition, it is also widely used in competition. He replaced the Janus as a high performance glider at Schempp-Hirth. Although it shares its name with the standard class discus monoplace, its design is entirely different. One can nevertheless note a certain resemblance, the wing of the Duo discus having, like the discus a form in crescent formed by the assembly of several wing segments. He made his first flight in 1993 and is in production in the factory located in Orlican in the Czech Republic. The discus duo has a wingspan of 20 meters with a four-piece wing with a slight forward arrow to allow the centre of gravity to move forward to the rear pilot. Its finesse varies from 45 to 46 depending on the versions. 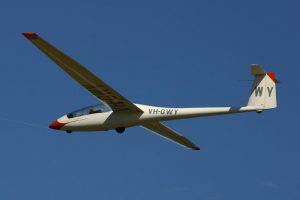 Designed by the engineer Klaus Holighaus, the glider flew for the first time in May 1974. Production copies integrated several improvements in January 1975. The first copies are known as Janus A. The Janus has a fiberglass monocoque fuselage similar to that of the Nimbus-2, but the cockpit has been lengthened to allow two pilots in tandem with doubled controls under a single-piece canopy. The landing gear consists of a main wheel with a drum brake and a small front wheel. The wing is in 2 parts, in a median position with a dihedral of 2 °. It is equipped with bending shutters of + 12 ° to-− 7 ° (and with 5 notches). The depth is monobloc. About forty copies of the Janus a were produced. The Janus B was produced until 1978, it differs from a by a flap depth, instead of a monoblock depth, as well as by a slightly different flap control (the notch at + 4 ° disappears). This version was very successful, the glider becoming a reference for the school of Flight on the campaign. The latest generation of Janus, known as Janus C, is characterized by a new design of the wings. The wings and depth of the Janus C are constructed of carbon fibre, its wingspan is increased to 20 m and its performance is much better than that of the Janus B. The Janus CM is a motorized version using a Rotax engine mounted on a pylon behind the cockpit and retracting into the fuselage. The prototype flew the first time in 1978. 100 Janus have been built since the beginning of the 1980 years, not to mention the motorized versions. It is particularly suitable for campaign instruction and training to gliders equipped with curvature flaps. A French version of the Janus was developed, the SCAP-Lanaverre SL-2 by the SCAP (aeronautical marketing Company of Plessis SARL) and Lanaverre, he made his first flight in 1977. The main differences with the Janus A are the ballast arrangement in the wings, a fixed depth with a compensator, and a more comfortable cockpit with locations for parachutes.