The birth of the aerodrome of Fayence takes place by decree ofSeptember 30, 1929, signed by the President of the Republic Gaston Doumergue and the Minister of War André Maginot. They declare the acquisition of several parcels of land for the purpose of the development of an aerodrome in Fayence of public utility. Taking possession of these parcels is declared an emergency. TheFebruary 16, 1931The 46 owners signed their bill of sale. In June 1931 then in April and October 1932, four other owners completed the acquisition by the state of the aerodrome of Fayence and it is in winter 1934 that the airfield is operational. The4 June 1937, a new decree ordered the purchase of new land in the commune of Tourrettes, for the purpose of enlarging the land. TheSeptember 15, 1937The air base known as the Regional Aeronautical Observation Group No. 548 (GAO 548) is located in the commune of Fayence. With the observation planes ANF the Mures, the pilots had the task of photographing and establishing landmarks on the Southern Alps for the general Staff. At the declaration of war with Germany in 1939, the GAO 548 (Aerial observation Group) was transferred immediately to Alsace. A fighter squadron from the air Base 102 Dijon-Longvic replaced the GAO. They did not stay long in Fayence because the terrain too short was not suitable for these fast planes. Between 1940 and 1944 the Land of Fayence-Tourrettes was successively occupied by the Italians and the Germans and it was only released by the GIAugust 15, 1944. At the end of the war, the Vélivoles Nice opted for Fayence, as they were driven out of the Nice airport reserved for commercial aviation. In 1946 the Vélivoles Cannes were expelled from the Cannes-Mandelieu airport reserved for motor planes. The state assigned them the unused military terrain of Fayence-Tourrettes and the Fayence-Tourrettes airfield became the reference platform for Vélivoles Azuréens. Since 1977, the aerodrome has been administered by the Joint Union for the Development and operation of the Fayence-Tourrettes gliding Centre, which delegates to the AAPCA the development, maintenance and operation of the terrain1. The A. PAC is a vélivoles association, the terrain is reserved for the practice of gliding and the airfield has become the first European Flight Centre in Voile2. It generates, as such, a part of the tourist activity of the municipality and the region, in the reception of French and European users.

Operating instructions for the platform applicable to May 1, 2015 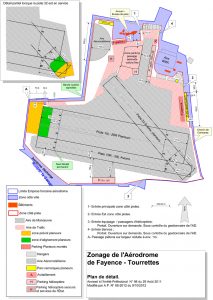 Creation of the joint Union for the Development and operation of the Fayence-Tourrettes gliding Centre by prefectural Order of 1967 and Union status of 1977: Since January 2015, it is formed between:

The joint Union is administered by a committee composed of delegates elected by the member communities, at the rate of: