A glider is an aircraft, heavier than air (a one-seater weighs about 350Kg with its pilot), which resembles an airplane, but with elongated wings and more tapered shapes.

Devoid of motor, energy to sustain, a glider slowly descends into the surrounding air. To mount, the glider will have to “simply” stand in a volume of air that rises: a lift. The Lift is the name given to the volume of air that rises. The thermal is the most classic: the air near the ground heated by the sun, expands and becomes lighter. It rises in a column usually surmounted by a pretty cloud: the cumulus. Gliders often spiral under these cumulus clouds, rising with the hot air column.

How to pilot a glider 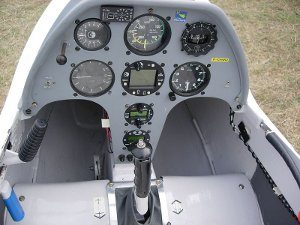 To control the flight of a glider, there are three main controls, as in an airplane. One on the handle back and forth to control the speed, a second also on the handle from left to right to control the inclination. The third control is the direction, operated with the feet, which acts on the rudder. One can be a pilot student from the age of 15 and a patented pilot at 16, and then carry out solo flights on board near the airfield. The glider pilot patent is a first step that penalizes the pilot’s ability to drive his trajectories, manage his safety and good bases in the research and exploitation of ancestry. After the patent the progression to high-performance gliders and large flights continues. Flights of several hours and several hundred kilometers are possible.

Gliders by “It’s not rocket science” on FR3

Note: To view the full screen video, click on the rectangle-shaped icon at the bottom right of YouTube on the screen.  Tap the ESC key to return.

Flying with no Engine